Professor Ravindra K Dhir OBE, of Dundee/Birmingham universities UK and Trinity College Dublin Ireland, recipient of Videsh Samman from the High Commissioner of India in the UK (1999), Honorary Fellow Institute of Concrete Technology UK (1994), Honorary Lifetime Fellow Indian Concrete Institute (2008), Honorary Member Construction Chemical Manufacturers Association India (2011), and Past-President, the Concrete Society UK (2010), is a researcher and teacher in concrete science, technology and construction, with specialities in sustainability, low carbon cements and value-added use of wastes. In Dundee, his hallmark has been, building of a grand multi-million sterling pounds, state of the art, concrete research centre, commonly known as the CTU, where research helped to break barriers and open new frontiers, such as fly ash use as a cement constituent, role of minimum cement content in concrete, use of small cores, upto 25 mm dia., in estimating in-situ concrete strength.

Consulting internationally, Dhir specialises in mentoring companies with the aim of giving them a cutting edge, as well as cost savings, in a competitive market. Dhir has served on several national and international technical committees and is recipient of numerous awards and honours, including the UK national honour, the Order of the British Empire, bestowed by the Queen in 1999, for his services to the construction Industry. 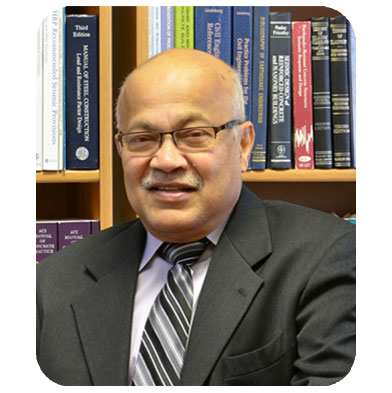 Dr. S. K. Ghosh heads the consulting practice, S. K. Ghosh Associates LLC, Palatine, Illinois, now a subsidiary of the International Code Council. Dr. Ghosh is active on many national technical committees, is an Honorary Member of ACI, and is a Fellow of ASCE, SEI, and PCI. He is a member of ACI Committee 318, Standard Building Code and the ASCE 7 Standard Committee (Minimum Design Loads for Buildings and Other Structures). He is a former member of the Boards of Direction of ACI, the Earthquake Engineering Research Institute and the Building Seismic Safety Council. He is a member of the Board of Governors of ASCE’s Structural Engineering Institute.

Dr. Ghosh has influenced seismic design provisions in the United States for many years. In addition to authoring many publications in the area of structural design, Dr. Ghosh has investigated and reported on structural performance in most recent earthquakes. He is currently leading a World Bank project on building code enforcement in Dhaka, Bangladesh.